As can be seen from the pictures, the children are clearly enjoying their 15- minute runs on Wednesday mornings. No PE kit is needed, and the pace is steady. What is missing are parents and carers – come and join in;you’re welcome!

You will probably be aware of recent concerns around physical inactivity and childhood obesity. As they go through primary school, many children put on weight and, across the UK, around 35% of pupils in Year 6 are categorised as overweight or obese. In addition, many 10-year olds lack basic fitness.

The Daily Mile is an initiative which was started in February 2012 by Elaine Wyllie, who was then Head Teacher of a large Scottish primary school. She was concerned by the children’s obvious lack of fitness and went on to prove The Daily Mile to be both sustainable and effective in combating inactivity and obesity in her school.

The result was that, in November 2015, the Scottish Government wrote to every Scottish primary school to recommend that they implement the scheme too. In addition, in August 2016 the UK government’s Childhood Obesity strategy identified and supported The Daily Mile’s contribution towards the recommended hour that children should spend taking daily exercise in school. 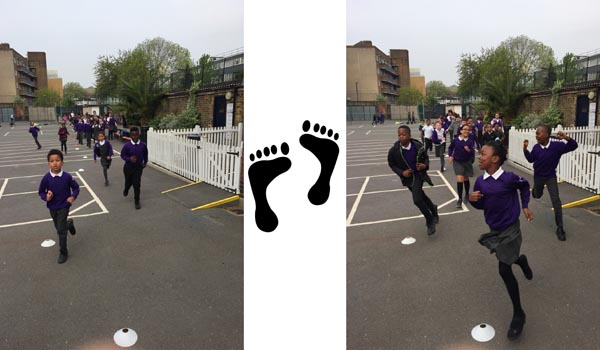 The Daily Mile is very simple to start in a school. Every child in a school or nursery goes out in the fresh air to run or jog at their own pace for 15 minutes. It is not competitive though some will compete and that is fine. Most children will average a mile in the 15 minutes, with some doing more and some doing less. It is not PE, sport or cross-country but physical activity in a social setting that is aimed at improving the children’s physical, social, emotional and mental health and well being. The children run in their ordinary school clothes with trainers being ideal but not essential. It can help children to focus and concentrate in the classroom and raise their attainment. And most importantly, the children really enjoy it.

Since 2015, The Daily Mile has been adopted by almost 3,000 schools in the UK alone, proving extraordinarily popular with thousands of children, parents and teachers. The initiative is also attracting strong overseas interest, and schools have signed up in over 40 different countries. Globally, it has been adopted by over 5,000 schools. Southwark Council has pledged to support the introduction of The Daily Mile to all its schools over the next 4 years. We introduced The Daily Mile to Brunswick Park on 24 April. Currently, our Daily Mile is on Wednesday mornings before School in the Key Stage 2 playground starting at exactly 8.40 am.

Pupils from Years 2, 3, 4, 5 and 6 can take part. They should come to school as normal in their uniform but with suitable footwear. If it is raining then the Daily Mile will be cancelled. After the 15 minutes pupils will then go straight to class. If you have any questions please get in touch.

This website uses cookies to improve your experience while you navigate through the website. Out of these, the cookies that are categorized as necessary are stored on your browser as they are essential for the working of basic functionalities of the website. We also use third-party cookies that help us analyze and understand how you use this website. These cookies will be stored in your browser only with your consent. You also have the option to opt-out of these cookies. But opting out of some of these cookies may affect your browsing experience.
Necessary Always Enabled

Any cookies that may not be particularly necessary for the website to function and is used specifically to collect user personal data via analytics, ads, other embedded contents are termed as non-necessary cookies. It is mandatory to procure user consent prior to running these cookies on your website.